Death in the High City is now available in Leicestershire libraries

It was a proud moment seeing my novel, Death in the High City, on display in a public library for the first time.

The book, looking slightly unreal in its plastic jacket, was on display on the counter of Shepshed Library in Leicestershire. 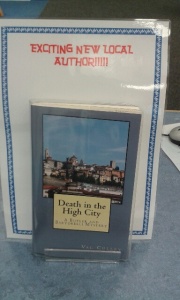 It is also in stock at Loughborough, Coalville and Ashby-de-la-Zouch, libraries close to where I live in Leicestershire.

When I left the library, I felt like an anxious mother leaving her child at school for the first time and wondering how it will get on during the day.

Would anyone want to borrow it? What might people say to staff at the library about it when they return it?

Becoming available in the Leicestershire library catalogue is yet another development in the life of Death in the High City since it first became available in Kindle format in May 2014. It came out in paperback two months later and since then I have had some very encouraging feedback sent to me personally by email and also in the form of reviews on Amazon.

In October the book was launched officially in Bergamo in northern Italy, the city where most of the action in the novel takes place. The event was attended by about 60 people who showed a lot of interest and were keen to get hold of a signed copy as it was the first time anyone had set a British crime novel in Bergamo.

But what will Leicestershire library borrowers think about Death in the High City? So far it is uncharted territory and therefore I am eagerly awaiting the reactions of readers.

Death in the High City is a ‘cosy’ crime novel that will please people who like books set in Italy.

They both speak good Italian and are used to asking questions and finding information. Having recently been made redundant they both have plenty of time available for sleuthing and have already turned their attention to an unfortunate event that has taken place in another beautiful part of Italy…

For more information about Death in the High City visit www.bestofbergamo.com

Posted in Death in the High City, Italy